Whether you are new to firearms or would like to refine your techniques at an advanced level, our professional training staff can help develop your shooting skills. All of our Firearms training is conducted and supervised by a current Law Enforcement Instructor and former Special Forces Instructor.

Aaron served for 10 years as a member of America’s elite U.S. Army Special Forces. As a “Green Beret” he had the pleasure of working with some of the finest soldiers in the military and training soldiers all over the world.  After his time as the Senior Engineer of Operational Detachment Alpha 1223, Aaron helped prepare new soldiers for the rigors of Special Forces Assessment and Selection. Aaron rounded off his career as a firearms instructor at the Special Forces Weapon’s Maintenance and Training Facility located in Fort Bragg, North Carolina.

Aaron currently instructs active shooter intervention, pistol, and rifle courses for the renowned personal challenge company GORUCK Having led over 100 events for GORUCK, Aaron continues to contribute to the fight here at home.

“Special Forces shaped who I am today. My goal is to help others in the community be the most proficient and prepared version of themselves possible and to make our community safer through education and instruction. We owe it to them”. 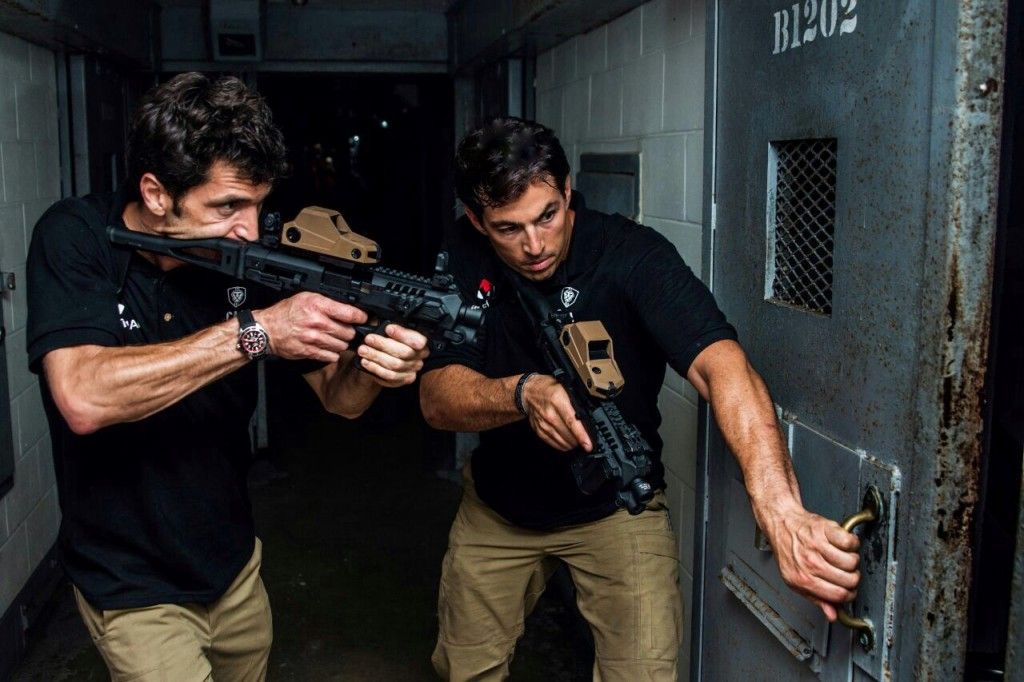 Garret Macrine “Machine” is a current member of TACLET, the Special Operations component of the US Coast Guard, and former member of the Israeli Defense Force where he served as an elite “Duvdevan” Commando. In addition, Garret is a Federal Boarding Officer, Florida Department of Law Enforcement Firearms Instructor, Florida State Law Enforcement Officer, certified as a Protection Professional “C.P.P.” through ASIS, currently holds Class G, D, Di, K, M, and MA licenses. While serving in Israel, Garret was assigned as Personal Security Detail (PSD) for Israeli Ministry of Defense officials on high risk assignments in the Middle East. Garret holds a Master’s degree in Homeland Security and Counter Terrorism from the Interdisciplinary Center in Hertzlia Israel. In addition, Garret is a certified E.M.T. and the Editor of “The Counterterrorist Magazine”.

Troy grew up in Fort Myers, where he graduated from Fort Myers High School and attended Edison College. An outdoorsman, Troy achieved the rank of Eagle Scout in 2008. Troy is an avid shooter of over 20 years and strives to continuously expand his knowledge and experience. In 2001 Troy started began a career in the security field working as an armed guard. He performed duties including Armored Car Services and Personal Protection Details for VIP clientele. He has experience in self-defense shooting techniques, both in the line of duty and as a matter of curriculum.

Troy joined the Shoot Center staff in May of 2017. He began duties as a Gun 101 and private session instructor in August of 2017. Additionally, Troy’s current position is as Shoot Center’s Training Director. His weekly duties entail managing training facility usage, forecasting training events, staff training, and the expansion of Shoot Center’s educational opportunities for its customers.

Scott grew up in Cape Coral Florida where he graduated from Mariner High School. Scott then joined the Marine Corps and spent the following 11 years conducting operations. He deployed twice twice with the 13th MEU and once with the 15th MEU. Scott was part of 1st Battalion 4th Marines, Task Force West that became Operation Iraqi Freedom in March of 2003. His Battalion executed combat operations in Nasiriyah, Al Kut, Bagdad, Najaf, Al Qaim, and Fallujah. Scott was a certified Range Safety Officer while in the Marine Corps, Training NCO, Infantry Squad Leader, and Platoon Sergeant. He was medically retired from the Marine Corps in August 2009.

After retiring, Scott enrolled at Edison State College in 2010 and graduated with an Associates Degree in 2012. Scott then attended the American Gunsmithing Institute where he earned many certificates. Most notably he is a Certified Glocksmith, Certified 1911 Pistolsmith, Certified AR-15 & M-4 Riflesmith, Certified Firearms Appraiser, and Certified Cowboy Action. Scott is an NRA Certified Refuse to be a Victim Instructor and Range Safety Officer.

“Scott’s goal is to help bring firearms safety and fun to families in the community and to educate those who want a better understanding of firearms.”

Students will learn the basics of firearm safety, marksmanship and concealed carry techniques. Participants will study applicable laws and gain exposure to case studies. This course will finish with a 10 round shooting diagnostic. All graduates who demonstrate safe gun handling will receive a State Qualified training certificate for the application of a 37 state Concealed Carry Permit.

Students will learn how their daily environment can affect firearms safety and how to avoid hazards. Become accident proof, not accident prone. Learn to load and unload, store and receive basic recommendations on the latest upgrades for your firearm.

In addition to the basic skills learned in Concealed Carry, you will be exposed to techniques which will aid you in surviving a real attack. Students will learn various shooting positions, how to correct weapon malfunctions, and how to conduct combat reloads. Students will then be exposed to techniques for surviving low light encounters. Students will finish with a 15 round diagnostic test. All graduates who demonstrate safe gun handling will receive a State Qualified training certificate for the application of a 37 state Concealed Carry Permit.

You can sign up for a class online over the phone, in store, or using the links below.

ALL SALES FINAL. IF YOU NEED TO RESCHEDULE PLEASE CONTACT SHOOT CENTER 7 DAYS PRIOR TO THE CLASS DATE.